A guide for dance in Athens 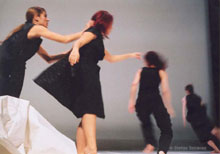 THE HELLENIC FESTIVAL IN ATHENS
The Hellenic Festival in Athens was establish in 1954 and as an international cultural institution aims, among other things, at inviting and presenting famous groups, as well as internationally acclaimed artists in Greece, on theatre, music and dance at the Herodio Theatre, at the Ancient Theatre of Epidaurus and at the Lecabetus Theatre, between May to September. 23 Hadjichristou and Makriyianni St,11742 Athens, Tel: +30210 9282933, www.Hellenicfestival.gr