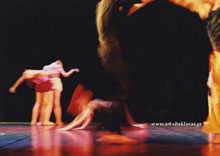 One of the main theoretical issues concerning photography is whether we should consider it as an art form or simply as a documentation of historical events, people or other living creatures, objects, physical phenomena, places etc. Documentation is the obvious and well-established role of photography, which records traces of reality that we perceive through our vision.

To contemplate photography as an art presupposes a specific framework. In the beginning of the 20th century, Alvin Langdon Coburn referred to photography as the most modern of arts, since at the time it was a new medium that facilitated individual artistic creation, a view that continues to be valid today. As Susan Sontag says, “photography is a multiform way of seeing and, when in talented hands, an infallible medium of creation”. It is an art that captures time and space by discovering, in the words of Henri-Cartier Bresson, “the structure of the world”.

It is essential to mention that there is a difference between our conception of photography as true expression and as faithful recording. This difference was the motivation for Stelios Baklavas to create this exhibition on dance. Dance is created in time and space, using the human body as a means of communication. To capture and freeze the flow of motion on photographs is in conflict with the idea of dance itself. However, it depends on the creator/photographer to conceive an idea and to decide on both his artistic and technical choices. During this process he might decide to reveal the true expression of dance movement, which presupposes both the form and content, and not just record faithfully the external form, like the figure of the body, the costume etc. 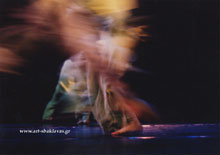 The dancer’s body becomes the place were the choreographer’s intentions and ideas are materialized and presented. It is a body dancing in a specific space, chosen by the choreographer, possibly surrounded by scenery or multimedia, with a specific costume and lighting. These visual elements, which might consist part of a performance, are interacting with the dancer’s body which consequently is captured by the photographer. The artistic choices of the photographer mainly depend on lighting and the subject matter.
In dance, as we have already mentioned, movement flows in time and space and in this way it assumes its form and content. Thus the idea of using a static stand for photographing dance will promote a documentation of only the external form, without allowing the possibility to reveal and demonstrate the traces created by movement in space, which are not always seen by the naked eye. As Francis Bacon believed “you should limit in order to increase the energy”.

Stelios Baklavas, as a creator/photographer, attempts to use his own body, actively through his movements and simultaneously with dance action, in order to follow the flow of the dance movement in time and space. The artistic result of these photographs is remarkable. Through these photographs he discloses and enhances a certain reality of dance, as he perceives it in his role of the mediator between the camera and the dancing movement in space. We could argue that what he presents, through his special use of the camera, reveals a different aspect of dance, exposing in this way the unperceived and fleeting facets of movement, manifesting a photographer’s personal view of dance.